The Neurodevelopmental Perspective – Back to Basics

Neurodevelopment: The development of the nervous system through the lifespan of an organism.

For those of us fortunate to either have children of our own, or with very young nieces, nephews, cousins and the like, we  identify with the terms such as crawling and rolling, as being rooted in these early stages of childhood exploration.

We may remember with fondness, as a child learns to adapt to the expanding world around them through these basic forms of locomotion.

Much has been made in recent years within the health and fitness industry as to the benefits of these primitive movement patterns. Modern approaches now widely embrace the concepts of “natural movement”, and its potential benefits to our health and fitness.

But for many of us, the question still remains as to why are these types of movements so important?

To gain a greater understanding, we need to look back to those early months of growth and development during infancy, and begin to comprehend the power these early forms of movement such as rolling and crawling had upon our ability to move and develop during these vital first months of life.

There would have been a time early in all our lives, where all we could do is lay prone on our backs, unable to summon the strength to raise our own necks, limited by our own unpreparedness for life.

In time, as we experienced further milestones, we began to raise our heads to observe the world around us.

Beginning to play with these simple movements as we teeter back and forth, harnessing  the power of our intrinsic stabilisers to initiate movement.

Yet higher forms of movement such as kneeling, standing and walking, for a while, remained beyond our capabilities.

Around these early months, rolling would have been the first true experience of deliberate locomotion we would have encountered.

In turn, once we developed the capacity to roll from our backs to our fronts, we gained the necessary shoulder and core stability to raise our torsos into Push Up-type postures.

Time spent in these positions enabled us to acquire the hip mobility (and stability) to bring ourselves to all fours. It’s at that stage we would have taken those first tentative steps into the locomotion pattern we recognise as crawling. 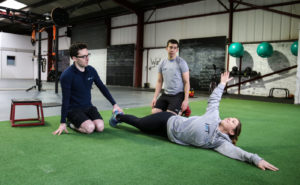 Remember, before we ever learned to walk, we crawled.

Such is the power of these early movement experiences, if one of these early steps or milestones is missing from our neurodevelopmental sequence, often serious movement dysfunction can occur.

Something changes however, between these early experiences at infancy as we move into adolescence and adulthood. We often lose the basic capacity to perform these fundamental movements such as rolling, crawling, squatting, even breathing for that matter.

By taking ourselves  down to the floor as we did as children, on our backs, fronts, all fours, half-kneeling, where we began, we’re re-learning the skill sets that came with our exploration of the world in these early months.

In a time where we experienced the world through observation and exploration, moving hands and feet in an alternating, reciprocal patterns, as nature intended for us to move. 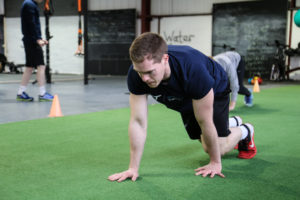 It’s within these patterns that we have the potential to unlock movements we lost long ago. We tap into skills that where never taught or coached to us, but form an integral part of a our central nervous systems (CNS).

Skills that enable the development of the higher levels of locomotion such as walking, running and jumping that we all take for granted today.

We roll and crawl to get back to a time where we had our near-limitless mobility, and began to explore and develop our individual stability. Learning and refining with each repetition as we moved, fell, and picked ourselves back up again.

The Neurodevelopmental perspective underpins the learning process of restoring movement patterns. If we can enable you to progressively acquire a new skill in each of the fundamental milestones in the same way you learned the movement to begin with, we can turn back the clock on your health and fitness, and open up new possibilities for movement.

Why not get in contact, tell us your story and see how we can help you make a change in your health and fitness.