The way in which we move, the range of motion we have access to at our joints, and the capacity for us to load the body internally and externally, are all dependent on our ability to breathe.

Whilst “breathing” and “breathing exercises” may be a buzzword within the industry of health, fitness and performance, I’m sure we can all appreciate, breathing isn’t something new or novel.

We breathe upwards of 20,000 times a day, and with each breath that we take, there are associated movements within the body that occur to enable us to shift and alter our body shape to complete the respiratory cycle of inhalation and exhalation. Every bone, muscle, ligament, tendon, organ, fascial compartment and so on, are all influenced by respiration.

The ability for us to access and maintain the full respiratory cycle and it’s associated movements, moving between the full excursion of exhalation and inhalation, has a huge confounding impact on our capacity to move through ranges of motions at the joints of our body.

In today’s insight I want to look at this in relation to two of the simplest gym staple exercises, the Squat and the Deadlift, and use the Pelvis and Sacrum as example for the relative motions that occur.

Consider from the outset however, that relative motions also occur through the foot, ankle, lower limb, ribcage, shoulder girdle, upper limb and hand in relation to respiration. Yet the example of the pelvis will hopefully provide the most visual representation.

We will focus purely on the mechanics at the pelvis that enable us to achieve these two movement patterns from the inside-out. In this case we’re talking movements associated with the pelvis, sacrum and pelvic floor as it relates to respiration whilst squatting, hinging and breathing.

Hopefully it will start to provide some insight into where individuals may struggle when it comes to accessing the range of motion required, or why issues may arise in performance under load. 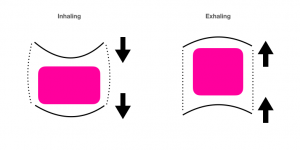 Simultaneously, this causes the pelvic diaphragm to descend to capture the downward movement of the organs and viscera into the abdominal cavity.

On exhalation we see a reversal of these actions. The pelvic diaphragm contracts to push back up against the abdominal contents as the thoracic diaphragm reascends into its more domed resting position.

Under non-compensatory respiratory mechanics, the actions of the pelvic and thoracic diaphragm mirror each other. Decension on inhalation, ascension on exhalation.

To better understand the influence of respiration and relative motions of the pelvis on how we move, begin to think of the pelvis in four segments, an anterior (front) and posterior (back) split into left and right sides, such as in the image below. As we explore the two movements today, and more complex movements as we continue with future posts, this will help a lot in establishing where movement is occurring within the pelvis. 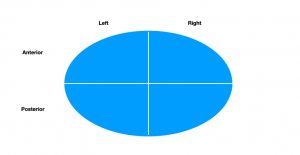 In the next diagram below we have the movement of the pelvis during inhalation. Whilst the arrows may represent a wider range of motion change that would typically be associated with a clam breath in, the movement occurring remains the same. 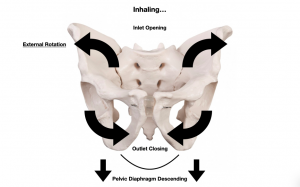 As we breathe in and both diaphragms descend, the pelvis needs to alter shape to enable the pressure being applied from above to have space for the abdominal contents to move into.

This is achieved by an external rotation of the illium bones of the pelvis which opens the inlet to enable the guts and viscera to move downward. As the inlet opens, the outlet closes which enables the musculature of the pelvic floor to descend and “catch” the abdominal contents. Much the same way as a water ballon filled with water stretches when held upright as the water pulls down on the ballon. 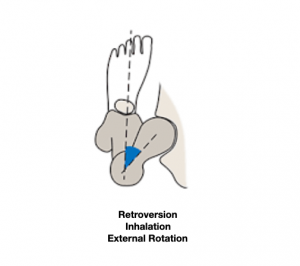 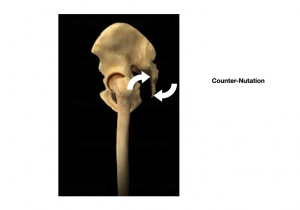 On inhalation, we see counter-nutation of the sacrum in which the sacrum tilts backwards to increase the opening and available space within the pelvic inlet.

The combination of these three relative movements, external rotation of the illium, retroversion of the hip socket and sacral counter-nutation, create what we would call an inhaled position of the pelvis. 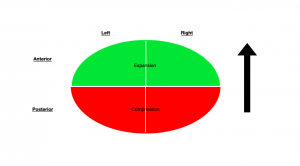 We move through the direction of expansion. In this case, the anterior expansion of the pelvic floor is directing movement downwards.

This is a fundamental requirement our ability to squat directly down through full range. Without these relative motions occurring, what may seem as an effective squat purely form a visual perspective, may involve compensatory movements to occur to achieve a movement without maintaining this full excursion of respiration and the associated movements. 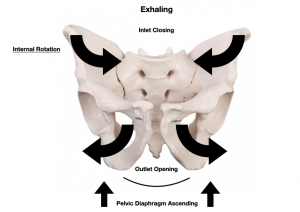 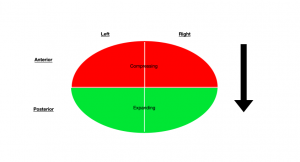 To provide a quick review before we jump into the Squat and Deadlift, the inhaled position of the pelvis is one that is more;

Whilst the exhaled position of the pelvis is one that is more;

Applying this into the movements of the Squat and Deadlift simply requires us to understand the relative motions that occur as we move through the range of each of the two movements.

Beginning with the Squat, we first need to appreciate how gravity influences respiration within our resting posture in standing.

Assuming we are standing still on two feet next to each other, this represents an inhalation position of the pelvis with the relative motions at play. This is because we are always biased slightly towards inhalation. We see this physiologically with the concept of residual lung volume. Even with our fullest maximal voluntary exhalation, we still have some degree on air still within our lungs to maintain the pressures we need internally to remain upright against gravity.

Any movement therefore the begins with a bilateral (two feet), symmetrical position, begins from our inhale-biased pelvic position.

As we descend through the Squat, we move from inhalation (~0-60 degrees) to exhalation (~60-120 degrees), and back to inhalation (~120-160 degrees) in the very bottom range of the movement. To successfully descend into the Squat with whilst maintaining relative motion, we therefore need to move between…

These movements direct the internal pressures to expand sufficiently in the appropriate areas to achieve the depth on the decent.

On the re-ascent of the Squat, we again see a reversal of these movements, beginning from the bottom in a bias towards external rotation, retroversion and counter-nutation and moving through internal rotation, ante version and sacral nutation around the 90 degree point and back to more inhalation bias, as we return to standing.

This middle phase of the movement, the more internal rotation biased, mid-range portion, is crucial in our capacity to control the descent and produce force in the ascent of the Squat.

If we imagine for example, the difference between squatting to parallel/90 degrees of hip flexion, we may be able to recognise how this involves movement between inhalation to begin, into exhalation around the 90 degree point, and a return to inhalation on standing. We can likely achieve a Squat to 90 with only the ability to achieve the exhaled position of the pelvis from our starting bias towards inhalation assuming relative motions are in place.

So to overview, our Squat pattern requires us to direct and control forces directly down into the pelvis.

To achieve full depth in a Squat in which our sitting bones are over the top of our heels, we need to the pelvis to achieve its full range of relative motions of inhalation and exhalation as it relates to illium external and internal rotation, hip socket retroversion and ante version, as well as sacral counter-nutation and nutation, amongst a host of other relative motions within the body that we will discuss in future insights.

Moving onto our Deadlift example, we once again require the body to move between its exhaled and inhaled positions. However, the degree in which we achieve these relative motions changes.

From a bilateral, symmetrical stance with a pelvis more biased towards illium external rotation, retroversion, sacral counter-nutation and an eccentrically orientated expanded anterior pelvic floor, we need to redirect internal pressure to create a hinge motion, as opposed to a squatting action.

To achieve this, we need to create compression in the anterior portion of the pelvic floor and expansion posteriorly. This redirects the abdominal contents into the open space we’ve created, enabling a hinge action in which the hips move posteriorly (back) rather than inferiorly (down). 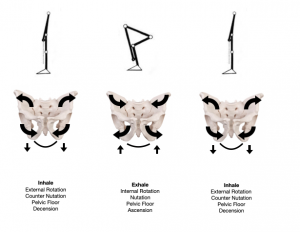 As we should now be beginning to grasp, this posterior expansion is the exhaled position of the pelvis with the relative motions of illium internal rotation, ante version of the hip sockets (increasing femur internal rotation), and sacral nutation.

We will have all seen individuals who can drop into a Squat with seemingly little to no resistance but struggle in movements that involve hinging such as a Deadlift, Romanian Deadlift of Single Leg Deadlift. They lack the capacity to achieve this exhaled position of the pelvis to create force into the ground.

Likewise we will have seen individuals who are incredibly strong within hinging movements such as the Deadlift, but simply cannot below 90 degrees within a Squat without some very clear, obvious compensations. They lack the capacity to achieve the inhaled position of the pelvis to create expansion and depth within a Squat.

The ability to achieve these relative motions is dependent on our ability to maintain the full excursion of respiration inhalation to exhalation and back again.

Yet whilst we may understand these motions in relation to how we should move and breath under ideal conditions without any constraints, humans are complex.

We have genetic factors that will bias us more towards inhalation or exhalation, we have superficial strategies developed through training and lifestyle choices that can again alter these relative motions and the full excursion of breathing.

But fundamentally, we cannot separate these two factors, moving is breathing and breathing is moving.

In our next insight, we will take our concepts of inhalation and exhalation as they apply to human locomotion, or gait, as it’s commonly referred. This is the foundation upon which all exercise selection and execution at IFT is based.