Respiration drives Neurology, which in turn drives our Biomechanics.

Within the field of Strength, Conditioning and Personal Training, a growing level of emphasis is being placed on the influence of both the nervous system and respiration on biomechanics of how we train.

An increasing number of professionals are seeing the value in breath-work, its corresponding influence on the Autonomic Nervous System (ANS) and the potential it has in both performance and recovery.

Frameworks and approaches such as Functional Movement Systems and Postural Restoration Institute, are shedding light on the importance of respiration with the fitness and training realm.

As the name suggests, the Autonomic Nervous System (ANS) contains two primary subdivisions which are responsible for control of functions that are below the level of consciousness (think breathing, heart rate, salivation, perspiration etc…).

The ANS forms part of our Limbic System, a primal portion of our brain responsible for dealing with functions regarding emotion, behaviour, motivation and threat appraisal.

Most of us are fairly familiar with the two subdivisions of the ANS by some term or another. Often referred to as the sympathetic and parasympathetic systems. Or more simply, our “fight, flight and freeze” (sympathetic) and “rest and digest” (parasympathetic) responses.

Yet what we often don’t recognise or fully appreciate, is the impact that these systems, and neurology as a whole, have on our ability to train, rest and recover.

Our sympathetic nervous system (SNS) is activated by perceptions threat, and is typically associated with extension-based postures. Think of occasions in which we jump at an unexpectedly loud noise, or walk down a dangerous looking alley at night, inhaling, tensing up, and the associated stressful feelings that ensues.

The SNS has some fairly typical and predictable responses to both moderate and extreme stress. We’ve all experienced as our pupils dilate, heart rate accelerates, mouth dries, a sudden increase in alertness, possibly even bladder relaxation (….!). 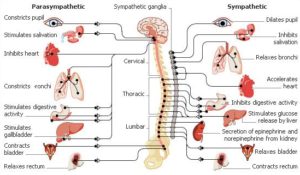 Yet the human body is indiscriminate about the nature of stress, whether its physiological, psychological or emotional, it all elicits the same response.

When face-to-face with a lion capable of quite literally biting your head off, and a spouse with the uncharacteristic ability to do the same, we often react in differing degrees to the imposed stress…

Stress and SNS activation is a perfectly normal physiological response for our necessary survival. An active SNS has been a crucial component to our species to respond to environments less favourable than those that we currently live in and maintain our survival.

When food meant a hunter-gatherer approach and predators roamed more freely that today, we we’re required to literally sprint for our lives. An active SNS powers such behaviours.

The danger to health and wellbeing arises when the SNS is overstimulated as a result of chronic stress in non life-threatening situations. Issues arise where the regions responsible  for inhibiting down and applying the break to the stress response (Ventral Vagal Complex), allowing for parasympathetic system facilitation, fail.

An active stress response under threatening conditions is a positive adaptation. Not being able to turn it off is what causes the vast majority of the stress-related issues related with modern society.

Hunting for survival, and a 24hr risk of being eaten, may no longer be realistic stressors in 21st century living. However, physical training stress, social and peer group stress, work stress and so on, are all very real occurrences.

Yet as mentioned, the brain is indiscriminate. It reacts in the same way. If we perceive threat, we illicit a stress response.

If we compound an already challenged system that may be emotionally or psychologically threatened, with more input from a physical stressor (i.e. training) , we run the risk of impairing the ability of the nervous system to regulate between the two states, sympathetic and parasympathetic.

Under these conditions, our ANS doesn’t have the capacity to alternate back into a more parasympathetic state (rest and digest) to enable recovery. We’ve got a nervous system that’s stuck in sympathetic overdrive, lacking the capacity to react to different stimuli from the environment in any other way than a sympathetic-driven stress response.

As functioning, healthy, athletic individuals, we need to have the capacity to switch between sympathetic dominant states and into more parasympathetic resting states.

If there’s limited threat perception in response to a stimuli that’s unthreatening, we gain this crucial variability in how we respond.

This impacts what we do at IFT significantly. We want you resting outside of sessions, and recovering in times during sessions when we need to illicit that parasympathetic response.

Yet from a training and performance perspective, the  goal remains in being able to switch into sympathetic “mode” when the intensity increases.

Many individuals thrive in high stress environments. Whether this be working, social or physical, they live for the adrenaline and drive that the nervous system can provide through the SNS.

They lift heavy, train hard, sleep little, and push boundaries past exhaustion. Yet these are often the same individuals who lack the capacity to truly rest and recover.

They can’t shut down.

The same individuals will often present with postures that are representations of this pendulum swing towards the sympathetic. Think flat thoracic spines, hyperinflation of lungs, overdeveloped lats and paraspinals, to name but a few tell-tale signs. 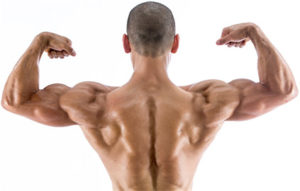 These individuals love to extend, and extension is sympathetic. It’s fight or flight.

Can’t flex? Well, you also now can’t rotate (Freyettes Law)… and our goal is to enable individuals to breathe, rest and rotate.

Meditation, Yoga, Pilates and many of practices support this parasympathetic response. Emphasising “rest and digest” by promoting exhalation, ease of movement in multiple planes of motion, and mindfulness of the body. 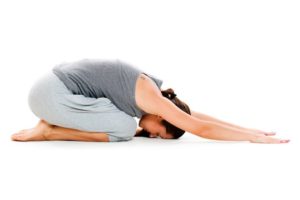 The key lies in being able to alternate between responses. Too sympathetic and it’s chronic overstimulation, fatigue and burnout. Too parasympathetic and we’ll never have the capacity to push ourselves physical to reach new limits.

Variation in exercise intensity, selection and type, promotes a nervous system with the same variability.

This is a fundamental human requirement, be variable.

For a further look at the influence of the Nervous System and Respiration on performance, why not take a read of a few more Insights…

It all stems from the breath...

Stress, Appetite and a Search for Allostasis