The Functional Movement Screen (FMS) is a tool developed by American Physiotherapists and Strength coaches Gray Cook and Lee Burton. Through their early experiences and observations of the physiotherapy profession during the 1990’s within assessment and treatment, they believed that the isolation of joints and individual muscle function was leading to a continuous oversight of a fundamental premise of human movement at a global level, that humans “tend to operate in patterns and sequences”.

In response, they began to develop a method of standardising movement quality that focused not on isolation, but patterns of movement. With resultant fine tuning leading to the Functional Movement Screen that we see and use today.

The FMS forms part of a broader approach to movement and fitness through the Functional Movement System. This approach encompasses not only the FMS but the Selective Functional Movement Assessment (SFMA), the clinical extension of the FMS, and the Y-Balance Test, used to assess motor control and functional symmetry. 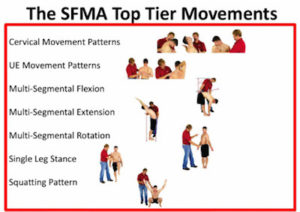 The Functional Movement System is an all-encompassing approach to health and fitness, it has the capacity to effectively screen and assess movement dysfunction, identify painful patterns, develop mobility, motor control and fitness all within a single system and framework of rehabilitation and training.

The FMS is comprised of seven basic movement patterns, which an individual should be able to demonstrate a basic level of competency within. Components involve observation of basic mobility (shoulders and hips) and axial stability (“soft” and “hard” core stability). As well as stance in three varying foot positions; two-legged (squat), single-legged (step) and split-stance (lunge).

Each movement is scored on a scale of 0-3, with a score of 0 on any of the movements an indicator of pain, seeing the screen stopped and medical referral seeked. By its nature, the primary purpose of the screen is the separation of pain from dysfunction, health issues from fitness issues.

It’s vitally important to recognise at this early point one of the key tenants of the Functional Movement System, pain alters motor control. This simple statement should guide so much of what we do as health and fitness professionals, yet unfortunately the concept remains widely ignored within the fitness world where the mantra “no pain no gain” remains still.

We must therefore separate painful actions from dysfunction as early as possible within the training process.  Only with clean, uninterrupted pathways to the brain will an individual have the ability to learn and adapt to the training stimulus provided.

Above this safety net for pain separation, a score of “1” indicates severe dysfunction without pain, a score of “2” as minor compensation, and a score of “3” representing a near perfect representation of the movement in question. Seven movements, each with a possible score of 3, creating a maximal total score of 21.

The goal of the FMS isn’t necessarily however the achievement of perfection with scores of 3 across all movements. However bare-minimums levels of competency are expected to be met to enable training for fitness purposes (load, volume, intensity etc…) to proceed.

At scores of 0, 1’s or in the presence of asymmetries between sides (left and right), individuals will lack the mobility, stability and/or motor control to absorb and adapt to the stresses of training without risk of possible future injury or resulting compensation.

Our introductory goal therefore is score of 14 (7×2’s) with symmetry between sides. By achieving this, we ensure the fundamental movement competency is present first before capacity training begins, as the FMS tagline states, “move well, then more often”.

Why is it used?

Much has been written since its inception within research articles, journals and online forums that has criticised elements of the FMS. It is often remarked that many of the movements are deemed too challenging for certain populations, too far from actual exercise performance within a sport/training environment, and not inclusive of many elements many within alternate professions would consider important within screening situations.

However individuals fail to often recognise that the FMS is a entrance assessment, an introductory screen. It unquestionably provides a reliable, repeatable measure to establish baseline competency within individuals across a broad spectrum of ages, sports and abilities, something clearly missed in a industry and profession still widely driven by isolation of joint and musculature, often missing the bigger picture of movement patterns.

In much the same as a blood pressure cuff only tells health professional if an individual is within acceptable realms, the FMS indicates when movement is a potential risk. It does not indicate why, nor was it ever intended to, its purpose remains as a screen to filter, not as an assessment to diagnose.

It’s by delving deeper into the FMS to its origins, recognising the screen as part of its wider system, that it begins to become clear how the screen itself represents so much more than just the seven basic movements used.

It is with familiarity with the concepts of neurodevelopmental theory, our early development during childhood,  through individuals such as Gray Cook, Clare Frank, Pavel Kolar and the work of the Prague School for Rehabilitation and Dynamic Muscular Stabilisation (DNS), that it becomes possible to identify greater with the screen and its use of key developmental milestones found during the first 0-14 months of growth. 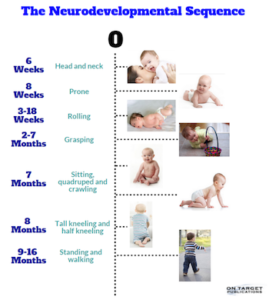 Screen components such as Shoulder Mobility and Active Straight Leg Raise (ASLR) are no longer isolated mobility assessments, but instead much more powerfully represent the months 3-6 in which baby raises feet in the air, moving hands towards toes, demonstrating appropriate mobility and stability of the shoulder girdle and pelvis, achieving this key developmental step.

Likewise, Rotary Stability is no longer just an indicator of core performance in a battery of movements, but now represents months 4-6, in which baby rolls from prone to supine demonstrating use of deep intrinsic stabilisers in a “reflexive, soft” situation.

As they continue developing, they eventually push up from a supine position to brace in a modified “push up” position showing a more purposeful demonstration of “hard” stabilisation, an early example of our Trunk Stability Push Up (TSPU).

The development and acquisition of these milestones are pre-wired through the Central Nervous System (CNS), occurring almost without fail in all children within small, repeatable and predictable windows. These are powerful processes built into the very fabric of who we are, the processes that brought us from an immobile, uncoordinated newborn to a standing, squatting, walking toddler within the space of 18 months. There is no more powerful period of motor skill acquisition.

We all acquired these skills before we had the capacity to understand, communicate, follow direction or question its purpose.

No teaching or coaching was required.

How does it impact my training?

From a fitness perspective, the FMS provides a baseline of competency upon which subsequent training can begin. It indicates what movement patterns or fitness components can be trained immediately, safely knowing movement “quality” is present, whilst also indicating areas that may require specific focus to restore joint position or movement pattern correction through targeted intervention before stress is added to the system (load, volume, intensity, duration etc…).

Practically for example, an individual who currently lacks a “clean” (minimum symmetrical 2’s) on the ASLR, either through 1’s left and right or an asymmetry (eg. 1 on the left, 3 on the right) should have loaded exercises such as the Deadlift removed temporarily removed from their programme until the underlying quality is addressed.

In a fundamental movement pattern such as the ASLR, unilateral leg lowering, the individual has failed to demonstrate effective sequencing and control of the pelvis without some level of biomechanical compensation to achieve the minimum standard expected for higher level input.

The exact cause would still up for debate (screen vs. assessment) and further enquiry would be needed to establish the “driver” of the pattern (mobility, stability, pattern sequencing??…), however at a fundamental level this individual failed to achieve the required level of competency through the ASLR for higher level exercises with the addition of load.

This is not to say all loaded exercise should be removed, nor that they should never Deadlift again, just that at this time, there is an underlying pattern issue that could hinder execution and performance within the Deadlift, it might not be the right exercise for that individual to maximise the training effect and learning process of hip hinging.

The FMS is used to keep you the client, at the centre of training, pain free and away from injury risk. It enables a trainer to understand the way in which you move as an individual as early as possible within the training process and develop and programme around your needs.