The Functional Movement Screen (FMS), is a tool developed by American Physiotherapists and Strength Coaches, Gray Cook and Lee Burton. Through Cook and Burtons’ early experiences and observations of assessment and treatment in the Physiotherapy profession during the 1990’s, they began to recognise that the isolating of joints and individualising of muscle function was leading to a potential oversight in a fundamental premise of human movement, that we tend to operate in patterns and sequences. 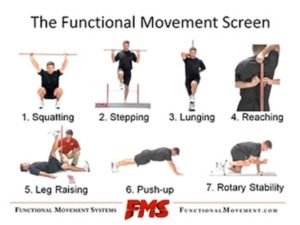 Why is it used?

Through extensive research and clinical experience, Cook and Burton sought to develop a standardisation for basic movement quality. It is through the use of the FMS, that we a provided with a tool that allows for the separation of movement classified as acceptable, from that considered dysfunctional or even painful.

The FMS is comprised of 7 basic movements. Which regardless of fitness or activity level, as humans, should be able to demonstrate basic levels of competency in. Components of the screen involve screening our mobility at the shoulders and hips, our stability (“soft” and “hard”), and stance in three foot positions; two-legged (squat), single-legged (step) and split-stance (lunge).

Each movement in the screen is scored on a scale of 0-3. A score of “0” on any of the movements is an indicator of pain, which sees the screen stopped and possible medical referral seeked. By design, the primary purpose of the screen is separation of pain from dysfunction. Pain is first and foremost, a health issue, NOT a fitness issue.

The FMS further looks to assess asymmetry between left and right sides of the body, to ensure individuals remain within expected norms of side-to-side differences.

This standardisation of movement allows for objective measure of an individuals movement quality. Much the same way in which a blood pressure cuff simply indicates whether an individual has high or low blood pressure, whether it is within acceptable boundaries.

What if I’m not fit enough?

There is no pre-requisite to taking the FMS unless pain is already present, its purpose is to establish your current baselines of movement. The screen itself is entirely bodyweight based. There is no external load. We are simply asking the question of can you manage your own bodyweight.

How does it impact my training?

The FMS provides a baseline upon which our subsequent training can begin. It indicates what movement patterns or fitness components can be trained safely knowing movement quality is present. The FMS further indicates areas that may require specific focus to restore joint position or movement pattern correction, before more input (weight, repetition etc…) is added.

If you’d like to learn more around the FMS, take a look at our extended article, FMS Unravelled.

Understanding “Energy In vs Energy Out”