Complex vs Complicated: The Non-linearity of Health and Fitness

The way in which the human body moves at a cellular, connective, structural and behavioural level is immensely complex. We’re in a constant state of fluctuation and non-linearity. A round-the-clock exchange, day and night, manipulating external objects and our own bodies as we interact with our environment and others.

Yet the way in which we’ve traditionally viewed the human movement system has tended to be reductionist in approach. We’ve often looked at our system as a component of its individual parts. Believing that if we know the function of each of the body’s elements in isolation, we can effectively establish how the system works as a whole.

However, as I’m sure we can all appreciate, the human system is far greater than the sum of its parts, unrivalled in its intricacy.

A change in path has been welcomed by those that teach, train and coach in the world of human movement. This paradigm shift has been towards a complex system approach, one that recognises the immense complexity of the human body, yet equally accepts that its convolution does not necessarily have to involve a elaborate description or answer…

The understanding of how a car works, for example, is far easier and practically applied when the overall function of the steering wheel, accelerator, break and clutch are broadly explained. Press this to go, this to stop, this to turn and this to change gear…

We don’t need to know the role that each of the elementary particles (O2, H2O etc…) has in the build up of each component of the car itself. We know that cars are complicated in design, but it doesn’t mean it needs to be complicated to achieve the outcome of driving.

This is not to say that the role and function of elementary particles is to be ignored or dismissed, they still matter, much the same as examples such as isolated joint function still matters to how our body moves. Without this knowledge, there fundamentally would be no car to drive.

However, there are levels of appropriate definition above elementary particles and molecular physics, that explain how the car operates at a more overarching level to achieve the outcome of driving, without delving into the complex.

Part of our complexity lies in the dynamic nature of how our systems interact across multiple levels. In spite of how we attempt to train, we’re not linear beings in the sense that adding “A” to “B” will provide us with outcome “C” 100% of the time, in the same way that if I push the accelerator on a car, I can reasonably expect it to move forward.

If we we’re, we’d all follow the exact same training and nutritional practices and they’d work for each and every one of us with predictable results. We all know very clearly this is not the case.

What may work for Client “X”, may illicit completely different effects in Client “Y”. The same calorie deficits may work for one individual in weight loss goal, for another it may create an environment in which the body responds by increasing stored weight due to influence of system-wide stress.

Hypertrophy protocols with rep ranges of 10-12 may work to increase lean muscle mass in a group of clients, but may have only minimal effect in other individuals…

Research is beginning to show this more and more regarding our individual complexity and system interaction. It takes only a brief look at the degrees of variance within any study to see how wide-ranging the impact across individuals can be.

As humans, we benefit from this non-linearity. If we we’re linear in our approach, any deviation from the prescribed plan would create an alternate outcome to that intended. Pressing the break on my car predictably won’t cause me to accelerate. Yet some individuals may increase muscle mass by increasing training volume OR decreasing training volume depending upon the underlying factors and interactions at hand.

We know that we have the capacity to achieve the same outcome via numerous approaches. Our complexity and non-linearity allows us instead of being completely knocked of course in our intentions, to restore balance within the system and still achieve our intended outcome. 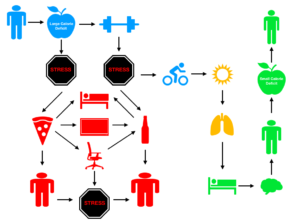 Yet in spite of our system-wide complexity, when it comes to learning movement, humans are inherently pattern-based beings.

We see, store and replicate movement through patterns. When an individual voluntarily makes the decision to Squat, we don’t consciously make the request to perform “x” degrees of motion at this joint, facilitation of this muscle, then this muscle and so on in a specific conscious order.

As Physical Therapist Gray Cook would describe, we run the “software” of how to Squat based upon the patterned-learning approach we took to developing the movement of squatting through the neurodevelopmental sequence in early infancy.

We run the known pattern, aware that each repetition has some degree of variance due to the over-riding complexity we have as humans.

Movement can therefore be viewed as a pattern-based approach within a complex, non-linear system.

We attempt to gain control within this variability through our application of methods that provide a “best-attempt” at what we know to be both biomechanically safe, and supported by the basic sciences .

But in dealing with humans, we must expect complexity, expect non-linear outcomes and expect variability in what we see. It’s part of what we are.

The more adept at running the “software” we become, controlling for variability, the less input and system interaction it takes to perform the same task, allowing for a greater level of refinement at a higher level of execution.

The belief at Integrative Fitness Training is in applying this Complex System Approach through screening, assessment and training using movement patterns as a cornerstone. This enables the human system to be viewed at its most fundamental yet functional basis without needing to turn the complex into the complicated.