The concept of bilateral (two-limb) or unilateral (single-limb) training has been something discussed within the realms of strength, conditioning and fitness for generations.

Varying opinions are offered across the internet, journals and other published resources. Most professionals are firmly set within one side of the camp when it comes to the cost/benefits of each.

In this insight, we’ll look to outline some of the basic cost/benefits of both bilateral and single limb training.

As was discussed within our introduction the theory of human asymmetry, we outlined how every system within the body, neurological, respiratory, lymphatic, musculoskeletal, visual and auditory, are asymmetrical with a right-sided dominance. Due to this neurological effect, our static internal organisation of organs and structures, as well as our dynamic asymmetrical interaction with the environment, compound this right lateralisation of systems and structure.

Due to the anterior tipping and forward rotating of the left hemi-pelvis towards the right, and subsequent lumbar spine orientation also towards the right, we develop increased lumbo-pelvic stability on that right side as we repeatedly load this neurologically driven right-stance pattern.

In “bilateral” stance, standing on two legs, internally we are often driven to actually be in a position of right stance phase of gait (extension, internal rotation and adduction) with a left-leg proverbially stuck in swing phase (flexion, external rotation, abduction).

Due to our asymmetrical internal structure, bilateral stance is not truly bilateral, its unilateral with right-side lateralisation…

Yet when we run, jump, turn and twist, are any of these activities actually taking place in symmetrical stance?

More often than not they will be in variations of split (lunge) or single-leg stance.

This cannot be argued, as soon as the base of support moves from two-leg to one, the need for stabiliser function increases as the output of prime movers decreases. However, the benefit gained is the building of strength independently between legs, asymmetrical strength benefits can be addressed.

The aim of single leg training is not simply just moving load, its the challenge of stabilisation and control of the body in multiple planes, a requirement of the vast majority of sports.

Separating between multi-directional sport performance and approaches such as Olympic Lifting and Powerlifting involves an appreciation for planes of motion. 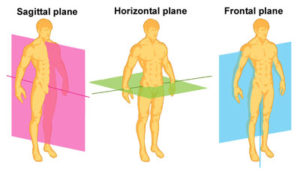 If we change out a dumbbell to a barbell, what has happened to the available planes of motion, do we still have access to three planes?

Add a barbell and we’ve taken away two planes of motion, a frontal and transverse.

Standing on two legs to squat? We’ve limited the capacity for frontal and transverse planes involvement by locking you into the one available plane, sagittal, forward and backward, with floor contact creating a “closed chain”.

Take you to single leg, and we have to control not only sagittal plane motion, but frontal and transverse plane instability. Three planes of motion.

If I’m a multi-directional sport athlete, I need access to, and control of, multiple planes of motion to meet the demands of my sport. I cannot afford to tie myself solely into sagittal plane activity through extension biased exercises such as Deadlifting and Squatting. I need to learn to maintain and control the frontal and transverse planes.

In events such as Powerlifting and Olympic lifting, in which the sport and training are intrinsically linked, we need worry less about having to maintain three planes of motion. The requirements don’t necessary dictate that I need anything more than vast amounts of strength within the sagittal plane at the expense of tri-planar function.

Much of peoples opinion around the use of bilateral training and especially with the back squat, stem around two points. Firstly the risk/benefits of spinal loading, the compressive forces placed on the spine due to the position of the barbell during the squat. Secondly, the effects that heavy loading and squat depth have on the knee joint.

Squatting with barbell behind the neck in a back squat position causes compressive forces, that cannot be disagreed. The position of bar placement within the set up increases lumbar and thoracic extension, anteriorly tipping the pelvis and increasing disc compression. The promotion of inhalation prior to descent to create intra-abdominal pressure again feeds into this hyperextension and compression of the spine.

For an individual to descend in this position they need a spine that can withstand such compressive loads, as well as hip joint anatomy that supports this type of action without transition of the pelvis into posterior tilt when range ceases. Few people do…

Due to the huge loads and torque on the knee placed during maximal lifts, it’s lead to the adoption of creating modifications and variations such as the vertical tibia position. In this position, the maintained vertical tibia shifts strain from the knee joint towards the pelvis and lumbar spine. This is achieved by a wider, turned out stance to maintain shin angle. Furthermore, variations such as box squats are also used to enable maintenance of the vertical tibia.

These variations and modifications are attempt to find biomechanical solutions to enable a movement pattern to continue under high load in spite of inherent risks.

The strength needed in sports such as Powerlifting and Olympic lifting tend to attract individuals that show a biological and genetic predisposition to the type of anthropometry that supports these positions, angles and loads.

However, for a loss of two planes of motion, frontal and transverse, large compressive forces and hyperextension of the spine as well as hyperinflation of the lungs, the costs outweigh the gains for a multi-sport athlete.

Single leg training offers limited compressive force on the spine due to the variety of loading positions and implements.

When it comes to exercise selection with new clients, bilateral training has to be considered in developing fundamental competency. An individual who demonstrates a basic incapacity to perform split stance (In-line Lunge), single leg stance (Hurdle Step) or the Overhead Squat within the Functional Movement Screen (FMS) will gain huge benefit from first learning how to move bilaterally with minimal compensation.

For the purpose of fitness gains, this doesn’t necessarily mean just with bodyweight. With competency comes load. The Goblet Squat, load centred anteriorly, is an incredibly effective way of promoting torso position and neutral spine. As well as promoting effective breathing mechanics without compression of a spine or risking knee joint health.

However once competency has been achieved the need to introduce frontal and transverse plane control is paramount to movement development.

Lower body bilateral activity has its place in the initial stages of movement development with general clients and multi-sport athletes. It is a fundamental component of specific sports training for those requiring sagittal plane dominance.

However taking an individual to single leg greatly increases the challenge. Yet requires only a proportionate amount of the load to illicit the same intensity.

Understanding “Energy In vs Energy Out”