Basics of the Core Pendulum Theory

At IFT, initial screening plays an vital role in ensuring the appropriateness of training methodologies and exercise selection. It also holds a duel, more fundamental role, in establishing whether a client is even at a stage where training for fitness purposes at high intensity or load is a realistic and safe option on entry.

The Functional Movement Screen (FMS) provides that entry level snapshot of foundational movement competency, answering the simple question, does the client have the basics in place for further input and stress to be added into the training programme, or is further assessment needed?

Through the Joint-by-Joint series (1,2,3) it was outlined how by applying this approach, “an alternating series of stable segments moving on mobile joints”, we can begin to reasonably explain dysfunction in movement. 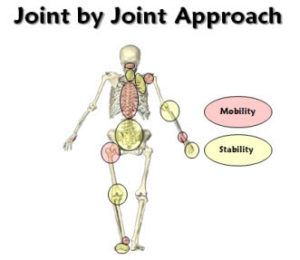 In unison with the FMS, considered a stability biased screen, the Selective Functional Movement Assessment (SFMA) is recognised more as a mobility biased assessment for diagnosis, both tools can be used for the separation of pain from dysfunction. Whilst the FMS catches pain at first sight in gross movement patterns, the SFMA is used to establish where the site of pain firstly is and the typical movements that invoke pain symptoms on a more joint-by-joint basis.

As we discussed through the Joint-by-Joint series, the example of an individual that has developed excessive stability at a joint at the expense of its required normal mobility, may see a changes in joint role above and below the site with a possible change of fundamental roles. A knee, considered primarily stable, may increase its instability in the frontal and sagittal plane when faced with a hip and/or ankle joint lacking in appropriate mobility.

A stable joint becoming mobile sees the introduction of pain, positional faults, dysfunction, dislocations, and the like. A mobile joint becoming stable has the potential to see degenerative changes over time and inefficient recovery as we are forced to slow down as we physically fight against the daily tasks we ask of it.

But why do joints sacrifice normal range of motion and limit our capacity to move freely?

From a professional standpoint, the concept of the Core Pendulum Theory proposed by Physical Therapist and Strength Coach, Charlie Weingroff, goes a long way to explaining this occurrence.

In his example, we take a typical pendulum, one we would have all seen high powered offices across the world.

Fixed to a stable axis, it has the capacity to move between full range of motion in either direction with energy passing through “neutral” between these two extremes.

Imagine this was a hip joint, at one end we have flexion, the other extension.

In a newborn child, we see this type of unrestricted mobility, able to freely move between full range extension and flexion without second thought. However as we age and grow, making either positive or negative health and fitness decisions, our ability to enter these end ranges of motion often diminishess.

With access to full ROM the neurological system know what’s safe for the body and what’s not. The brain recognises it’s capable of moving through full range without fear of injury to structure. When the system fails to recognise safe range, we see the typical threat responses of increasing tone, tension or tightness as the brain locks down the area to limit the perceived risk of damage to the joint.

However, if we fail to maintain these ranges, exploring them through pattern-based approaches to health and fitness and allow the brain to experience “normal” with an appreciation for human biomechanics, we see a change in our pendulum. 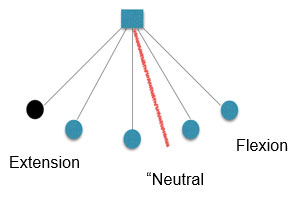 If we lose access to end range, in the above example full range extension, the bodies neurological system has lost its reference of where “neutral” now is. Our pendulum has been pushed towards the flexion end of the spectrum, our normal is no longer normal, its flexion…

So in our hip example, those muscles typically responsible for flexion, now even at rest are active, toned up and tense.

If we continue to emphasise this flexion based posture which we commonly do in our day to day activities, sitting at desks and the like, without trying to gain back our end range appropriately and progressively through normal joint mechanics, we are driven further and further towards one end of the spectrum. 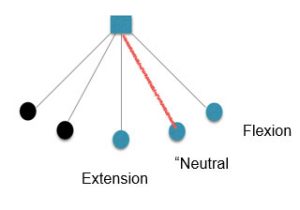 Through an appreciation of Charlie Weingroff‘s Core Pendulum Theory, we begin to see a framework for understanding the origins of observed postural patterns such as Janda’s Upper and Lower Crossed Syndromes.

Our human behaviours create predictable patterns at the major joint systems across the body, pushing the pendulum towards either end of the spectrum.

Through the Joint-by-Joint approach and the Core Pendulum Theory, we have a basis upon which to understand efficient human movement and postural dysfunction. With an of the Functional Movement Screen (FMS), biasing the stability aspects of the spectrum, coupled with the Top Tier Selective Functional Movement Assessment (SFMA) which counters with greater assessment at the mobility end, we gain a full appreciation of a clients baseline function when entering into a training programme.

The approach taken towards exercise and movement pattern correction will always varies between individuals, each within the profession with their own preferred method of training, correction or in a medical setting, treatment.

However, this screen and assessment combination, the FMS and Top Tier SFMA, coupled with two corresponding theories, Joint-by-Joint and Core Pendulum, we have the starting block upon which we at Integrative Fitness Training, begin our work with clients at any level.

For further information on the Core Pendulum Theory take a look at Charlie Weingroff’s Training = Rehab video series. It’s a superb resource and further introduction to the theory.